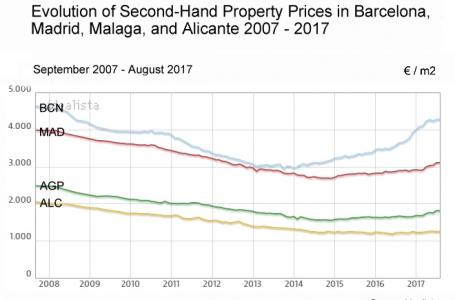 Idealista's latest statistics show that, after more than two years of relative stability in the prices of undeveloped land in Madrid, Barcelona, and Valencia, a notable uptick happened during the second quarter of 2017. This is widely interpreted as a sign of growing demand in the housing market which translates to strengthed confidence among developers.

Also in province capitals such as Malaga or Alicante, prices in the best districts are showing a strong rising tendency. However, in the case of Alicante, the overall index is still rather stable and average prices remain almost 40% below the heyday of 2007.